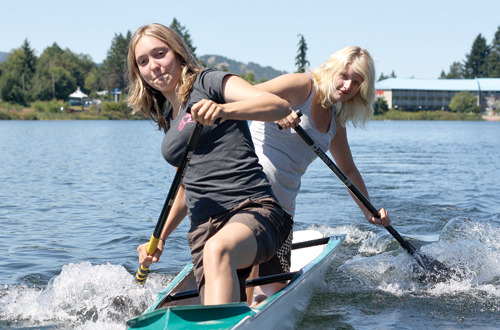 Nanaimo Sport Achievement Awards organizers had a tough enough time choosing finalists – now they face the still tougher task of choosing the best of the best.

The annual sport awards announced finalists this week. The awards will be presented at a banquet Feb. 4 at the Coast Bastion Inn.

In the Partners of the Year category, finalists are badminton players Jenny Aronson and Bryan Cassels, canoeists Natasha Cross and Liz Kraft and rowers Spencer Crowley and Kai Langerfeld.

Grassroots Coach of the Year finalists are Bob Milne for power soccer, Bob Saunders for cross-country and Nate Stevenson for football. High-performance Coach of the Year candidates are Tony Bryce for basketball, Bill Merriman for soccer and Kelly Russell for dragonboat racing.

Finally, the selection committee will also choose a Sports Story of the Year, which will be the John Barsby Community Secondary School football teams’ double appearance in the B.C. finals, Andrew Harris helping the B.C. Lions to the Grey Cup, or Michelle Stilwell‘s record-setting year in wheelchair racing.

The most high-profile name not to be selected as a finalist was Nanaimo lacrosse star Scott Ranger, who was chosen earlier this month as the News Bulletin’s athlete of the year for 2011.

Banquet tickets are $60 per person and proceeds will go to PacificSport, to support high-performance athletes and youth camps. Tickets may be purchased at the Coast Bastion Inn, at the PacificSport office at Vancouver Island University or by phone at 250-716-6110.

PHOTO: Nanaimo’s Liz Kraft, left, and Natasha Cross get out on the water at Long Lake. The two canoe racers are finalists in the Partners of the Year category at the Nanaimo Sport Achievement Awards. — Image Credit: File Photo